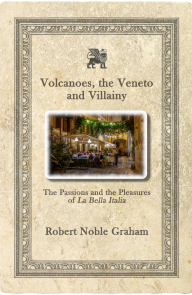 Now also in paperback from all Amazon outlets and other online book stores. Price £7.00 sterling in UK

“I reached 3,000 metres on continental Europe`s highest volcano, Mount Etna (Teide on Tenerife is a little higher but that`s not considered “continental” Europe). The temperature was below zero and our little group stood on one of the mounds left by the 2002   eruption. Despite piles of snow around us and being charmed by strange little ice formations on the black rocks, the  ash below us was still warm, in places burning hot. Our guide was disappointed that no one had brought an egg for demonstration of the thermal oddity of where we stood. We explained that Brits rarely go up mountains with raw eggs in their pockets. This appeared to surprise him. With a sigh he lifted his mind from that disappointment and pointed to the summit of the mighty mountain which was around 100 metres further up. He explained that most of the lava around the summit remained from the 2017 eruption. It was now cold, he explained, since it was a less deep deposit, and then confused us by warning us not to go any higher since there was serious danger of stepping in hot ash that would inflict injury and lead to urgent shoe replacement. Since the same appeared to be true of the 2002 lava on which we stood we wondered which of us was the victim of altitude.”

This is my second book about visits I have made to magnificent Italy. The first one, "Coffee ,Chianti and Caravaggio" dealt mostly with the great cities like Rome, Venice, Florence etc. On this visit I saw other sides of the country. I include my first visit to Sicily, one of the strangest place is have ever visited. Of course some of its dark side is well known. However, I also saw the magnificent Greek theatres such as the one at Taormina which sits 200 metres above the sea and another at Syracuse, legendary arenas for the classics of Greek drama. Sicily was once inhabited mostly by Greeks and some of its language remains. But I also saw, with interest, some of the action taken by the brave local population against the poison of the Cosa Nostra. Very brave and so far effective. Then I went to the much more prosperous Veneto. Not to Venice this time but to the lovely towns of Treviso, Vicenza and Verona. On then to Carrara which produces the world`s finest white marble. However, it too has its dark side and its great caverns have been the scene of murders and other crime. Then to Lucca,Pisa and the delightful cinque terre. I hope you may share some of the pleasures and passions of Italy.

"Claudio led us on in regal silence for a time and then paused, waiting for us to gather round. Once we were all assembled, silent and attentive he began, again speaking in what seemed to be a quiet voice but one that easily reached all of us. “I have introduced you to the concept of confusion when visiting Sicily. This is a valuable guide to understanding. Now I have to tell you that that was actually a lie. Really it`s a valuable warning that you don`t understand this island. Now I wish to bring you another. That is the concept of uselessness. We have, for example, useless politicians. You may think your own countries have that, but believe me, you cannot match ours. Following from that, we have useless government departments which fail memorably to do what they are supposed to do. They do, of course, take some of our money to ensure we cannot do anything useful with it which would offend our traditions. I am about to show you another example of total uselessness which costs money, but is, to my mind, one of the more valuable examples of Sicilian uselessness. If you follow me a few steps onward I ask you to look in the field by which I halt.“ He strolled on for a few steps in his easy way, smiled and indicated with one hand the field by which he was now standing. We looked in and all of us were both enchanted and bemused. In one corner of the field were three black wooden huts or shelters since they had no front wall. In and around them were piles of straw. Sitting in the straw or nibbling around it were several animals which appeared to be goats except they had long, very white coats. They were very pretty and looked at us with large, innocent eyes. Most remarkable about them however were their quite unbelievable horns. In the more mature ones these horns rose half a metre above their heads. In addition, they looked like no horns any of us had ever seen. They looked as if someone had taken strands of lasagne, very white and perhaps a foot and a half long. They would have been cut to taper at the top to a point. Then they would have been twisted into a spiral and given some kind of treatment that made them as hard as bone. Claudio told us these horns served no purpose that anyone had ever been able to identify. The females produced no milk to speak of and, since they were very rare, they were protected, so you couldn`t eat their meat either. Nor were they much of a tourist attraction since people worried that if they became too well known they would be in danger of theft or being pestered. “This must remain our secret” whispered Claudio, very audibly. “Now we will find the most celebrated structure in the Valley of the Kings,” he added and turned to lead us further on. "