My Life as a Writer

I was born in Glasgow at the end of the second world war. Events suggest the news of my birth brought about the immediate surrender of Japan. I took degrees in French and German and English largely to hide from the fact that I didn`t really want to join the working world. Ultimately I found employment in the publishing, oil and financial services industries, eventually running my own small financial services business which ran at a good profit despite the fact that much of my time was spent having tea and chocolate biscuits served to clients as they poured out their problems with ,wife ,children, mistress, prostate or the planning authorities.
I got married and had two wonderful children who are now successful scientists. Relationships can be difficult and I divorced in 1998.
All this time I wanted to write. I had some success when BBC Radio 4 broadcast my play `A Nocturne for Mr. Yeats` starring the wonderful Bernard Hepton ( of Colditz and Tinker Tailor fame). I published the novel `The Celebrity of Anders Hecht` in 2006 and it is available as a physical book on Amazon.
I sold my business recently and now at last have time to write and money to afford a bowl of soup as I do so.
`Masks of Venice`, now available as an e-book is based on an idea I`ve had for all my adult life but could not find a framework for. It indulges my love of Europe, especially Italy and Spain. I`d now add Greece to that list, a wonderful and tragic country. The catalyst for the book came from a woman who had read `Anders Hecht` and told me to my astonishment that I had an amazing understanding of how women think. This is a claim for which there is no evidence whatever in my emotional life. She asked if I could write a novel from a woman`s point of view. I liked the challenge and this is the result, also letting me play with questions such as `do we have past lives?` `what effect would they have? `
My latest novel , The Women from Crete` is a crime story set largely in Spain but also in Germany and Crete. It features the legendary detective Chief Inspector Miguel Rojas, the man with no passions. Rojas is courteous but aloof, remote, insomniac, a caffeine addict. Although he has never known the feeling of love or perhaps any other passion, his insight into those who do is astonishing. It is a crime story and a love story
I hope to publish more in the near future. 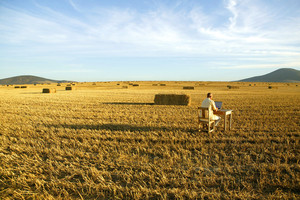