The Women from Crete -novel 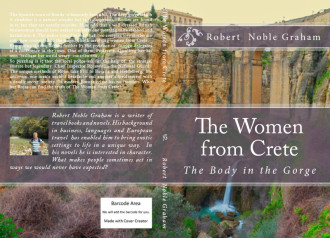 The Women from Crete

The Body in the Gorge

N.B. This is now available as a print book as well as an e-book. As a print book it is currently only available from Amazon but other online retailers will shortly have it. Books4 Spain is still dealing with the consequences of th death of their CEO Rod Younger. It will take them a little longer to have this available

*You can buy any of the books by clicking on the book`s name where it appears in red or on the image of the cover. That will take you to the appropriate Amazon page which will also give more information

Also available from Books4Spain by clicking on the website name below

I wanted to write an exotic murder story and The Women from Crete was the result.  I added the subtitle The Body in the Gorge because that is the strange discovery that begins the search in four European countries. Is it a ruthless professional murder, a crime of passion or a tragic case of mistaken identity. The initial discovery of the body of a well-dressed British businessman suggests all possibilities are available. The Andalusian police are fortunate at an early stage to get the specialist help of an elegant, lovesick professor who can supply a combination of facts and advice that probably no one else ever could.  The background of the corrida and Spain`s oldest bullring is perhaps appropriate for murder, but why such a strange one? How can a German secret society not known since mediaeval times be involved? How much more lies behind the passionate, intimate letter found on the body,written in modern Greek?  The strangely aloof Detective Rojas appears again. He had appeared in "The Celebrity of Anders Hecht". The biggest mystery is perhaps what makes Rojas tick. He appears to have no passions other than a dedication to truth. Trained as a priest but unable to get the answers he wanted in that department he switched to crime where he does a lot better.  Very soon connections appear in Germany, England and the Greek island of Crete. Soon two stories of apparently impossible love emerge . Death has already occurred from them. How can more and more tragic deaths be avoided? The enemy is not what he appears but he is much more dangerous.

If you click on the title it will take you to the relevant Amazon page.

Excerpt from The Women from Crete

“Well, let me explain, Professor. I need some translation both from Greek and German. I have some idea of what the German text is about. I have none about the Greek. They may be of little importance . They may be vital, shocking, intimate. I really don`t know. So, I really want as few people involved as possible at least until I know what they contain. I appreciate  that you are an expert. As such I imagine some fee can be negotiated.”

“No, no. That shouldn`t be necessary. Happy to help. Of course if we`re translating volumes….”

Esposito pulled a large envelope out of his briefcase.

“I`d be grateful if you would look at the Greek one first since I have no idea what`s in it. You will understand that anything you read must be held in the strictest confidence. If you have no objection I`ll record it. I can have a transcript made back at the station. I may have to come back and ask for a more formal translation”

Quadling nodded. His lean elegant fingers swept back his abundant hair and he took the two page typewritten letter.

“Well it`s modern Greek,” he mumbled. He raised his eyebrows and glanced at the police officer.

“This is quite an intimate letter.”

“I need to know what it says.”

He looked up again

“This is really quite touching.”

“Yes, of course. “ Like you I was astonished to find that you had thought of me as I had of you, intimately, warmly, erotically. I had thought you so far out of my reach and when I worked for you you were so restrained, kind, courteous.”

The Professor paused again, his long face, tanned by Mediterranean sun was serious, moved. He reached forward and took a sip of his wine. He wiped  a drop of water from his grey denim shirt.

“ Of course I had someone else. That had begun before I ever met you, but it was never fulfilling love. I was lonely. I was desperate. He seemed like someone I could live with but of course I had no suspicion of how low he would sink. When I looked at him and then at you I could see such a gulf. But you were married. I supposed you were happy. It was only later that I learned how much you had hidden in your restrained, well-mannered way. Then there were the years when I didn`t see you, but I still thought of you and, it seems, you of me.  It touched me so much that you were so hesitant about what you wanted from a woman and it moved me so much when you saw I was not shocked, not outraged as you seemed to expect. That you were such a volcanic, sensual, passionate man was a delight to me .

Then I met Joe who has been kind and caring. He loves me and does so much to help my insecurities. I would so much hate to hurt him, but how can I give up the opportunity finally to be with you.

What you tell me about the house is astonishing. I had given up all hope. I`m not sure  I ever believed there was hope. Now that I know it seems that all sorts of possibilities open up, my dearest one. How do I spend the time till I hear from you once more?

Quadling gazed silently at the pages for a moment and then looked up.

“What a letter. What a lucky man to receive something like this.”