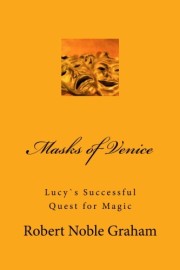 A Female Point of View?

There has been a sudden renewed interest in Masks of Venice. It  was by far the best seller of my books. It hs been overtaken in recent months by some of my others but it still sells. Someone suggested to me that perhaps the popular series about Italy with Francesco Da Mosta has made people aware again of how magnetic Venice is.   It remains the book which provokes the strongest reactions. None have been hostile, I`m glad to say, but some have thought it presumptious that I should try to write a book from a woman`s point of view. Whether "presumptious" or "ambitious", writing usually involves the attempt by a writer to see into a persona other than his own. Some of the great classics have been written by men adopting the female point of view: Madame Bovary, Anna Karenina, several of Henry James` novels.Writers have often taken on the persona of a murderer: Macbeth,Crime and Punishment and countless crime stories. Shakespeare took on that of an African,Othello and  Jew, Shylock. Walt Disney saw the world as a mouse, a dog and seven dwarves. Anyone who takes issue with it should consider that women often tell men things they would not tell other women. The character who has given rise to most strong reactions,Julia, is pretty much drawn from life. She is probably outrageous, although not in a way that suggests the book classes as erotica. Some women have found her the most convincing character in the book.

Venice is magical anyway so it was a delight to build my story around such an exquisite setting. It is intensely romantic and beautiful but it can also be unsettling, especially at night and especially if the odd events of Lucy`s visit there come about.

Is Don Juan more than a story and can the Masked Ball deliver the promised Magic? Lucy discovers and is surprised.

Based on an idea I had had for a novel since childhood but could not find the right format, it enabled me to create what I felt was a very unusual drama. Romance, paranormal and a very unexpected threat all grew very naturally out of the idea once I found the setting. I also had the chance to play with a lot of ideas that interest me . Have we lived before? What effect would it have on our lives if we did so? We are so accustomed to deceiving ourselves and others about who we really are. How could we escape from that ?

Down the centuries Society has not usually allowed women much freedom. Some have coped with that very well. How did they do it and what effect did that have on the men?

Excerpt from Masks of Venice

She was relieved when she came back in front of the Accademia and,since she knew she was not far from the hotel felt brave enough to explore further so she turned right , away from the Grand Canal. Another narrow alley and then she found a square with a patch of grass. Near the Peggy Guggenheim museum  a man sat in the sunshine. He was perhaps fifty something but looked  vigorous and  healthy. He wore the casual clothes of a tourist but they were of some quality and well chosen. He sat with a sketch pad  on his lap glancing up occasionally at a flaking palazzo across the narrow canal. Lucy who could sketch  quite well herself when she had time felt an unaccountable envy for his tranquillity. The excitement of Carnival did not seem to have reached him. All his concentration was on the delapidated structure, the decayed grandeur of  a more graceful age. Lucy edged nearer and peeped at the paper. She felt a little pang of sympathy. He was clearly not very good, but  there was something loveable about his being so devoted. He looked up, a humorous look in his eyes and said something in Italian.    `I`m sorry, I don`t speak Italian ,` she replied    He laughed    `I was asking you not to laugh at my attempt. If I take enough time I can do something respectable, Of course in Venice at Carnival respectable is not what we want is it?`    He was obviously Scottish with an easy manner, a little playful.    `I wouldn`t know,` she said evasively with a smile. ` This is my first Carnival. What should I expect?`      He raised his eyebrows and nodded as if a first Carnival was an event and should be acknowledged.  The reply needed some thought.    `Well, first of all, expect to be invited to join an incompetent artist in a cup of coffee. Time for coffee I think.`    It was only two o` clock, but perhaps that could be seen as `time for coffee` He began to gather his  things as if no one could dispute that it was time for coffee.    `There`s a café in the Guggenheim,` he continued,` but we`d be surrounded by tourists.` I like  one just through the archway . Will you join me?`    Of course she would. Chance encounters were the highlight of  trips abroad. This had been quite unexpected. He stood up. He was a little taller than she was, slim but sturdy, clean-shaven, blue eyes, a friendly manner.    They settled at a small table of solid wood. The clientele looked more like locals than tourists. A couple of elderly men sat by the window playing draughts, chattering  in strong voices and sipping red wine. One was thin, stubble-chinned and slow to speak. His companion was plump, more impulsive, quick to laugh. A woman of around sixty sat patiently and affectionately with a schoolgirl, probably grandaughter watching her dismantle a  medley of ice creams. Tempting patisseries filled a glass cabinet on the counter. The smell of coffee was rich and strong. Some Italian singer, not Pavarotti, was caressing an Italian song, not `Nessun Dorma` from a CD. The dapper, slim waiter brought coffee.    `So you want to know what else to expect ? But you must have come with expectations, some notion of what might happen` said Rolf, the artist..    As Lucy replied she noticed his hands. They were surprisingly small, although the fingers looked strong. The skin was smooth and tanned. He had broad, ridged fingernails. The hands looked warm and sensitive.    ` Maybe I came in search of the unexpected.`    `Perhaps you came in search of escape,` came the reply. He settled his blue eyes on her. What was he thinking? What did she want him to be th﻿inking?