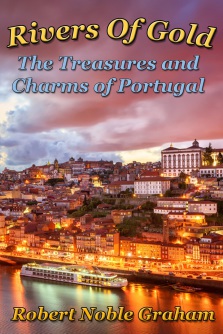 Although Portugal has been established as an independent state longer than almost any other in Europe it remains largely unknown. Its beaches and golf courses are popular of course but not much else. It was once the richest country in the world with its influence reaching as far as Japan and China in the East and Brazil in the West. It suffered by far the worst natural disaster ever recorded on the European mainland in 1755. It became the poorest country in Western Europe but is beginning to climb back towards some level of prosperity.

I have visited the country on many occasions for many reasons. Most visitors attest to the great charm of the Portuguese people. Of course the climate is a major attraction. It has towns of great, exotic beauty such as Sintra, celebrated by Lord Byron in his “Childe Harold`s Pilgrimage” or Tavira in the Algarve. It also has great variety. I cruised along the magnificent Douro river in the north, through the ancient vineyards. I visited Lisbon and Estoril, hotbeds of intrigue and espionage in the Second World War because of Portugal`s neutrality. Ian Fleming, Graham Greene and Compton Mackenzie were just a few of the MI6 recruits who found inspiration for later fame in its elegant hotels and Europe`s only functioning casino. I had magnificent seafood casseroles with the excellent Dao wine overlooking the spectacular beach and Atlantic breakers in Albufeira.

The rivers of Lisbon have been central to the long saga of the country`s history. The wealth from the Douro and the Tagus are well-known. Recent investigations and excavations are building a picture that suggests a great river in the south that has now disappeared because of the moving silt and sandbars may have been the origin of some of the greatest wealth and most tantalising stories of the ancient world.

My account of these visits is now available from all Amazon and some other online sites.