In the Heat of Salamanca 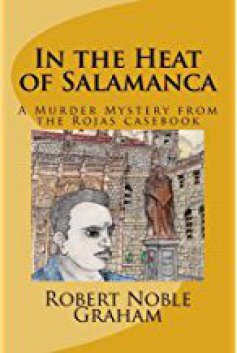 I am very pleased to say that the fifth mystery in the Rojas Casebook is now available both as e-book and paperback. It delves again into the record of the strange Chief Inspector Miguel Rojas of Spain`s National Guard. Rojas is aloof, remote and difficult to know. He is unfailingly courteous, even to criminals, but pursues the truth with a ruthlessness that even the most hardened lawbreakers fear. Although he is a remarkable psychologist Rojas is not known ever to have had an intimate relationship with anyone, male or female, old or young. Yet he has uncanny insight into the passions he appears never to have experienced. Each  volume from his casebook explores his extraordinary personality a little more. In the Heat of Salamanca shows sides of him we have not seen before as the complex case stretches over continents and the recent past, unearthing brutality, tragic loss and the courage of a man who is determined to save those he loves from fear and menace.

The story begins as a man is found dead in a dark corner of a Barcelona bar late on a Saturday night. He had arrived that day from Australia for his first ever visit. He is middle-aged in a bar for teenagers. Why murder a man who apparently knew no one in the city? Even for the legendary Chief Inspector Rojas this is a puzzle with no obvious clues. Yet immediately the body offers some bizarre evidence that leads to the ancient city of Salamanca via the remote Australian desert. An incident there 14 years before is strangely connected to the most audacious breach of security of private Swiss banking accounts. Slowly, Rojas unearths a story of a tender love affair cursed by events. He meets a beautiful half-Chinese woman in the ancient Salamanca University and he enters a world of international organised crime threatened by one, very brave, tragically lonely man. That man is now dead and others will follow him unless the legendary detective can solve the puzzle.  Rojas is helped in his quest by the lecherous, apparently dissolute lawyer, Moran, whose image conceals a brilliant, devious mind that outsmarts governments and criminal masterminds. Both would happily frustrate him and Rojas. Finally, in the heat of Salamanca, does Rojas at last meet the woman who can tempt him out of the ivory tower of his celibate solitude?

The paperback may take a day or two to be delivered at present but orders can be placed. It begins in the most unhelpful way for the police of Spain`s National Guard.