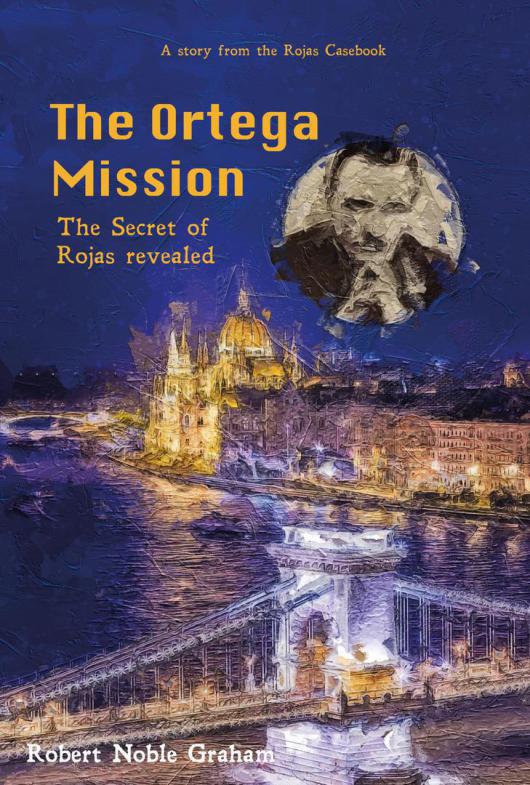 I am delighted to announce the publication of the latest novel in the Rojas Casebook series, the 7th. THE ORTEGA MISSION is subtitled “The Secret of Rojas Revealed” because throughout the novels Rojas himself has been an enduring mystery. Early on he is introduced to a black American jazz singer, Yolanda, who dazzles him with her talents before pleading for his help, but this is help of a kind he has never been asked to give. The intermediary is Anthony John Moran, the eccentric Irish/Scottish lawyer who haunts laptop clubs till four in the morning but heads meetings of vital importance at nine. He has agreed with the American ambassador that the only man likely to be able to carry out The Ortega Mission is Chief Inspector Miguel Rojas of the Spanish National Guard. When they meet Rojas is suffering from an unnamed malaise and yet Yolanda is immediately as struck by his insight as he by her musicianship.

The mission sends Rojas far from Spain to Budapest. We soon discover that this is not the legendary detective`s first encounter with the beautiful capital on the Danube. As one mystery after another about this strange man is explained Rojas realises that Yolanda`s simple but heartfelt request has led him to the trail of perhaps the most dangerous criminal in Europe. The Ortega Mission changes Rojas in ways he could never have suspected but reopens an avenue he had thought closed to him forever. It also requires him to tread very carefully on a path that flirts dangerously with the links between organised crime and politics in modern Europe.

The Ortega Mission can be read and enjoyed without any previous knowledge of The Rojas Casebook but those familiar with the earlier ones will see links and echoes which may add to the experience.

I`d also like to acknowledge the very skilled help I`ve had from Aude Boubaker Calder in preparing the book cover. I supplied impressive photographs but she has turned them into a masterpiece you could find hanging in the gallery of the Royal Palace on Buda Hill.

Here's where you can enter in text. Feel free to edit, move, delete or add a different page element.