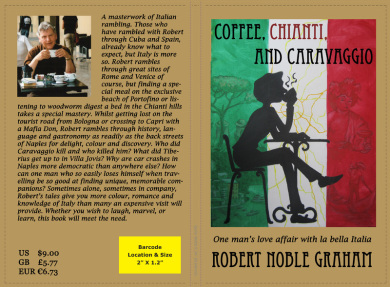 A Love Affair with Italy

Coffee,Chianti and Caravaggio was published on the last day of March and so far it is having the best launch of any of my books. I think part of that comes from the very original cover design of Luise Macdonald and the expertise and ingenuity of Kris krug in transferring that artwork into the complex pdf file you need to create the book online. It is available from Amazon both as a print book and an e-book. It has sold far more as a print book than any of my others in this short time and again that is probably a tribute to the artwork. However, forgive me for mentioning that the text has already had some good reviews also.

This is the longest travel book I`ve written and I was, oddly, grateful not to know the country better. I have been there quite often now but there is still plenty of it I have not visited.  Yet, even visits to small,little-known towns like Cervo or Alassio provide an abundance of interest. If I had seen much more of the country I`m not sure that I would ever have finished it. It was very enjoyable to write the book and relive some remarkable, dramatic, awe-inspiring or hilariously funny moments. I am missing it already. It does not pretend at all to be a travelogue. There are plenty of them. I hope it`s the nearest thing you can get to seeing a mediaeval pageant in Arezzo, climbing the steep road in Capri to the villa of Tiberius` orgies or eating fresh seafood on a sunny beach with wine and excellent company without getting out of your chair.

The following is a little excerpt from the Florence chapter of the book followed by one from the Sorrento chapter:

`Mandatory also was morning coffee outside in the same expensive café where we had enjoyed wine on the previous evening in the Piazza della Signoria. Audrey is the type of person who has only to sit at a table in public to find a soul-mate. I had been looking at a guide book to work out a sensible approach to the endless treasures of the Uffizi only dimly aware of Audrey in conversation. Audrey drew my attention and I looked up to see a stout woman at the next table. She was perhaps fifty years old or a little more. What immediately struck me about this lady was that she was sweating profusely and yet wore a thick coat with, obviously a woollen jumper beneath it. I looked up. “Would you mind beginning that again Eileen?” said Audrey. “This is fascinating.” Eileen who was also gulping steaming hot tea obliged. She spoke vigorously with a strong Lancashire accent. Eileen had evidently been a nurse but had in recent years been more involved in lecturing. This didn`t surprise me as she began a torrent of information in a voice very suitable to keeping listeners wide awake for a long time. However, I too was soon interested. Eileen had little concern for Michelangelo, the Medicis or even Florentine ice cream. She was a kind of pilgrim to the shrine of Florence Nightingale who had, we learned, been born nearby. Hence her name. Her sister had been born in Parthenopolis in Naples, resulting in her middle name being Parthenope. Eileen felt indignant that the world knew so little about her idol. As she lectured on in the Italian sun, sweating disturbingly, we began to agree with her. Apparently Florence`s arrival in the Turkish hospital used by the British in the Crimean war soon resulted in a dramatic increase in the nursing attendance and a dramatic fall of 90% in the weekly death toll. Not only that, but back home she had founded the world`s first nursing school at St. Thomas`s Hospital, and taught the woman who would return to the USA to do the same there. Evidently she was also a gifted mathematician who used statistical methods little known at the time. Pie charts were a familiar tool to her. She was also able to get things done in high places. At her instigation the great Isambard Kingdom Brunel designed a prefabricated hospital to be taken out to the Crimea to offer better working conditions. Eileen recited all of this (and much more) with hardly a pause. Then she did pause, looked at us and then admitted that what really interested her was that the great nurse`s drive had come from a series of mystical experiences she had, Joan of Arc-like, calling her to the work she did. Apparently the first of them had come upon her when looking at the great Egyptian ruins in Thebes. During her lifetime she said very little about these experiences, but, Eileen told us, she had left some very interesting writings describing them. This did sound like captivating stuff and we both were momentarily tempted to tag along with Eileen. However, by the time we spoke she was almost done with the city. She wanted to visit Thebes in Egypt where   `the spirit had spoken` to Florence and see if she could detect something herself. Then she wanted to find the hospital in Turkey where Florence had worked. I did find it interesting that Florence`s mystical experiences do not appear to have been in any particularly religious context. She was nominally a Christian, although a heterodox one. She appears to have believed that her own religion was by no means the only route to spiritual knowledge and had little time for sectarian views. Her influence on many aspects of British public health was extensive and profound and it seems that nursing standards in the hospitals of the American Civil War had been raised dramatically as a result of her. Eileen downed the last mouthful of her tea, wished us well and then, still sweating like a championship boxer and dressed like an Arctic explorer, she sped off in the general direction of Egypt.`

I soon decided thatSorrentowas a pleasant and picturesque base but not worth a lot of my time. The day after my arrival I walked down to the jetty to take the hydrofoil toCapri. It was a sunny day. The sky and sea were blue and the high walls of the island looked very near. I was not alone as I waited. There were clearly a few tourists like myself including an unhappy looking American couple. They were both quite short and round. The man wore a brilliantly red denim shirt which he appeared to have bought when he weighed three stones less. On his worried looking head he wore a grey baseball cap and his trousers were a pale mauve colour. It was difficult to believe his outfit had not been carefully chosen to defy and offend all notions of sartorial elegance. By contrast, a short man of around the same age, perhaps fifty, wore a matching suit and trilby of charcoal grey with fine threads of blue and gold delicately traced through. His shirt was indigo and appeared to be made of silk as was his golden tie with navy stripes. He had a bushy, carefully groomed moustache and his black shoes shone. Every finger of each hand, apart from the thumb, had a ring that looked like gold. He smoked a thick cigar as he paced regally up and down, chattering away delightedly. He was accompanied by two taller, thick-set young men who looked as if no joke had ever penetrated to the depths of their sombre souls. The man chatted to them, smiling at his own conversation which he clearly found scintillating. No doubt he was the local plumber, but it was difficult not to have thoughts of godfathers and men with impressive powers of persuasion. I decided that I was unlikely to seek out the company of either the American or the stylish Italian. I did however have the sobering thought that the American struck me as possibly a factory worker or shopkeeper who had worked hard and blamelessly all his life and was now having the European holiday he and his wife had dreamt of. I felt the Italian`s earnings were possibly of a more questionable if more substantial nature. In a just world the American would have been the happier man, but that did not appear to be the case.  I hoped my analysis was wrong and that each had the satisfaction their deeds had earned, but I thought it unlikely. I did toy with the intriguing question whether the main object of each man when he had chosen his attire that morning was to be noticed. If so, both, in their wildly different ways, had succeeded admirably. I then wondered whether having been noticed had enhanced their lives in any important way.

Eventually the hydrofoil arrived. It was larger than I had expected and accommodated us all quite easily. I had not particularly wanted the company either of the Americans or the stylish Italian and I was able to take a window seat on my own.  I sat and watched the blue water of the bay with an innocent and peaceful- looking Vesuvius in the distance. As I sat in thought a waiter came around offering coffee. Since I had no idea when my next shot of caffeine would be I accepted. It was hot, strong and very good. The Italians just have some very high standards for some things. The hydrofoil, like the boats, comes in at the very busyportofMarina Grande. The great pale rock towers upwards over the small harbour teeming with visitors. As we waited at the head of the stairway to disembark I saw the godfather still chattering delightedly as the Americans, rather like the Italian`s two companions, regarded the island with stony expressions as if queuing for prison.

The sun was now high in the sky and pleasantly warm. I found the milling crowds stimulating rather than oppressive and I always find the Italian language delightful.  I once read that the poet T.S. Eliot, even when he knew no Italian, realised that Dante Alighieri was a great poet with the first incomprehensible line of his work he read.  I`ve often wondered if, when he knew the language better, he would have given the same accolade to the entire population. I have heard plumbers clearing drains uttering musical language in Italian streets. Dante was a very great poet, but I feel he had a head start over the bards of more pedestrian tongues.