COFFEE WITH THE COLOSSUS 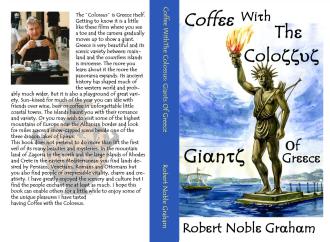 THE MOUNTAINS AND ISLANDS OF GREECE

I have now published the first of my books about travelling in Greece, COFFEE WITH THE COLOSSUS  The country is famous for its ancient wonders but I have found the modern country still supplies many. One of the wonders is how Greeks manage to communicate with each other in such a difficult language, but they do. I suppose a lot of people don`t know much more about the country than sunshine, debts and Moussaka. Although it is a small country it has immense variety. This book recounts some of my adventures when white-water rafing or hunting for the dragon lakes in the mountains of the north, investigating Knights Templar in Rhodes, having wonderfully fresh fish and wine with friends by the beautiful bay of Chania in Crete or sailing to Santorini, site of the greatest explosion in history.Even people who believe they know or care nothing about Greece have had their lives and their language enormously influenced by it if they speak almost any European language. When thinking of its wonderful culture and history it may be tempting to think of it as a museum. I hope my book can go a little way to showing how much interest, fun and vitality the modern country affords.

Currently the book is available on Amazon and a number of other outlets both as print book and e-book. It should be available on more before too long

Our next excursion contrasted in a number of ways with our day at Knossos. Here our guide was Elias, a large man who was a walking tribute to the fact that the island produced a lot of good food and wine, most of it apparently consumed by Elias. We soon realised that we had left the world-weariness of Spiro well behind us as our bus headed from Stalis into Heraklion. This was not to be our destination for the day, however. We were no longer in the antique world of Minoan Knossos. Elias loved Crete and everything about it. His mission appeared to be to make all visitors to the island wring their hands with bitter regret that they were not Cretan. In fact, his great pagan vitality was infectious. He reminded me of the equally exuberant if fictitious Cretan, Zorba the Greek, probably the best known book ever to come out of Crete, written by Nikos Kazantzakis, one of the island`s most celebrated authors. Elias did not actually dance as Zorba was frequently inclined to do, and for the stability of the bus that was perhaps as well, but you did feel his spirit was in a perpetual celebration of the landscape, the olives, the people, the wine, the seafood and the apparently endless number of festivals.

Elias proudly described Heraklion as we went through it and how much it had developed in recent years. He spoke about the war and how 12,000 German paratroopers had died taking the island. He described this event as if the invaders were doomed from the first, as if no amount of military power could ever succeed against the supreme vitality of Crete. The attack and occupation had been unspeakably awful, but there was something admirable and heroic about the way Elias described the island`s recovery.

The coach then headed into the interior, through deep valleys between high peaks, visiting little villages which had barely changed  in centuries and past vineyards and huge olive groves. Elias told us how special were the olives of Crete, as if all other olives had been mere experiments on the way to producing the perfection of the Cretan product. He told us that the preparation of the olives after harvesting and the production of olive oil had reached a standard probably unequalled in world history. The acidity of Cretan olive oil, he maintained, was only 0.3% whereas what we bought in supermarkets in Europe could well be 1.5% or worse. This was a persuasive argument which made us resolve only ever to consume Cretan olive oil until, back home, a little research made us realise that the acidity of olive oil was not a stable percentage. It would change over time. However, it does appear true that the Cretan product does begin with some advantage over most others. The acidity of the oil is a rather misleading term since it does not actually refer to the Ph content but rather to the presence of particular acids such as oleic acid. Elias became quite lyrical about the health benefits of olive oil, informing us that all skin conditions can be cured or alleviated by it owing to the presence of squalene. I had never heard of this substance and assumed Elias had simply invented it as a likely sounding, if little known, chemical. However, I believe it does exist and such research as has been done suggests he may be correct about its merits for the skin. He also explained that olive oil was very good for the heart and very helpful for those wishing to be slim. It was not immediately obvious how Elias could have known this. It appeared not to be the result of any experimentation on himself.

We eventually arrived at the village of Archanes, perhaps more a small town than a village. It`s a very attractive little place which has benefitted from European money. It has used it well, winning several awards as one of the best kept small towns in the continent. Elias told us that the archaeological museum contained some of the greatest treasures of the country`s remarkable history. This is not so strange since it is not far from Heraklion although our coach had taken a circuitous route to reach it. Oddly, we were not surprised when Elias also informed us that the wines of Archanes were probably the finest in all of Greece. The Kotsifali Cabernet, he advised us, was the equal of many of the great French vintages at much lower cost. I think we were becoming accustomed to our exuberant guide. Not that we thought him untruthful, but we did feel that turning down the volume on his mighty claims would probably get us nearer the reality. We were able to put this theory to the test quite soon. Before we left the coach to have a walk round Archanes Elias implored us to go to the square and visit the best patisserie in all of Greece and perhaps Europe itself. Not even the Champs-Elysées in Paris or the great bakeries in Rome could surpass it. We followed his directions and easily found the shop, a clean, spacious, inviting place with a range of tempting offers. We knew that lunch was almost due so we restrained ourselves a little. We bought some of the most inviting samples, ate them as we strolled past luxuriant bougainvillea, fruit trees and well tended floral displays and concluded that they were `quite good`.

We then strolled round to our assembly point in the centre of the village. From there we walked a short distance to a garden with long wooden tables in the shade of broad-leaved trees. They were set with cutlery and wine glasses. A slim, dark-haired smiling man in his forties welcomed us, shook hands with Elias and chatted to him.