THE SAVANNAH ZOMBIE and other tales from the Bermuda Triangle 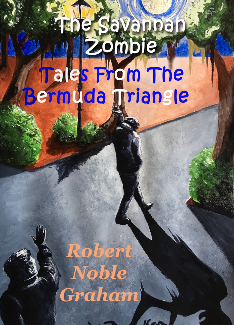 I first came across zombies when as a child of perhaps five my parents took me to see a film called, I think, Abbot and Costello meet the Zombies .Abbot and Costello were a popular American comedy duo and, as far as I remember, the film was very funny. I didn`t know anything more about these confusing beings until I was a bit older. Then when I was preparing to visit Savannah, Georgia, I learned a bit more. I`m really not very interested in the usual run of zombie and vampire stories and films but I have always been curious about what lay behind them and whether in certain circumstances I might take them much more seriously. The title story of this collection The Savannah Zombie recounts a recent visit I made to Georgia and a peculiar sequence of events. Whether they happened exactly as reported here or whether the Savannah atmosphere had a strange effect I don`t really know.
Not long after this I visited the Bermudas. We normally refer to them in the singular but in fact there are 181 of them. The Bermuda Triangle history is not by any means the only set of paranormal events allegedly linked with them. Their `spooky` history dates back to their first discovery by Portuguese and Spanish sailors in the 16th century. I think readers will agree that this tale of surprising passion is all the more touching because of its ghostly element. As with the first story it made me look at the paranormal and the most tender of human passions in a different light.
The final story is set in the remarkable island of Cuba which I visited some years ago. The island is beautiful and the Cubans are irresistible. It is an island of endless music and dance, but it has some disturbing history from its connection with slavery by inhuman transport from Africa and the different kind of slavery brought in by the baleful presence of the Mafia. The Mob made a fortune out of its opportunities as a pleasure ground for the rich during the American prohibition period. Alcohol was cheap and readily available and, sadly, so were the beautiful and sensual young women. That history has left deep marks on it but I didn`t expect them to have cast a shadow on me also.
So, this book of stories from The Bermuda Triangle, all with a paranormal element, all resulting from visits I made, is now available from Amazon either as an e-book (at just over £2.00) or a print book (at just over £4.00). Not a lot of money for three stories which will, I think, be quite different from anything else you have read.